Kékszalag is the oldest round the lake competition of Europe as the first race was sailed in 1934. The course is the longest -155 km - compare to the Bol d'Or, the Rund um and the Centomiglia.

The first Blue Ribbon Round the Lake Balaton Race (Kékszalag) was started on 1934. Held once in two years (except 1944 and 1946 because of the II. World War) and yearly since 2001 the sailing course has remained more or less the same. Start and finish lines at Balatonfüred and an approximately 170 km long distance course in between without stopover including turning marks at Balatonkenese the eastern, and at Keszthely the western end of the Lake Balaton. In the twentieth and thirties of the last century the sailing life developped quickly on the Lake Balaton. New clubs were formed including the Hungária Yacht Club by the best and keenest racing sailors. They began to think and speak about the necessity of a long distance yachting race to test the durability and the navigational abilities of the hungarian sailors and yachts. In the spring of 1934 based on the experiences of the Forgách Balázs Vándordíj long distance races sailed mostly in the twenties (Balazs Forgach Perpetual Trophy) the prominents of the Hungária Yacht  Club:  János Grofcsik, Miklós Antal  and Miklós Tuss launched the Blue Ribbon’s Notice of Race. As all the main hungarian yachting clubs and the best sailors supported the idea the first competition could already be organized the same year in July.

The Blue Ribbon is traditionally sailed in July on a weekend close to the full moon offering some lights for navigating in the night. Start at Friday morning and the time limit is 48 hours to accomplish the course. The winner is the fastest boat but also different class winners are awarded. Since 2001 two different versions of the sailing instructions are valid. In the odd years the participation was restricted by some rules to protect the traditional yachts. For example the use of trapeze, racks or wings are prohibited as well as using a boat with concave lines in the hull design.

Contrary in the even years any kind of sailing yachts could take part in the competition. Only multihulls were prohibited but later this kind of limitation was also obliterated  by the Hungarian Yachting Association. This way the 42nd Blue Ribbon, the 2010 edition was finally an absolutely free race again without any restrictions concerning the kind of the participating yachts. A free race to decide what team and which boat can be the fastest in sailing around our beautiful Lake Balaton. Exactly like our ancestors had dreamt it nearly eighty years ago.

The Blue Ribbon of the Lake Balaton is the oldest existing round a lake competition in Europe. ( Bol d’Or since 1939, Rund um and Centomiglia since 1951) The Blue Ribbon’s course is the longest among the main european round the lake events and nowadays has also the largest fleet competing (612 boats in 2009).

On the 27th of July in the early morning at 4.30 a.m. 21 boats started in this first ever round the lake race. Though there was mainly light wind the winner „Rabonbán” 30 sqm Skerry Cruiser (30 qm Schaerenkreuzer) finished at 13 minutes after midnight. Skippered by her owner  dr. Gábor Ugron they were sailing 19 hours and 43 minutes.  19 boats finished the race without problem. One boat grounded another dismasted.

After some stormy days the Lake Balaton absolutely becalmed for the start on the 16th of July. It is historically called the „48 hours race” the longest one due to the very light wind. The course was a bit shorter as the finish line was set at Tihany. The very light wind favoured the lighter dinghies. One of the greatest hungarian sailor of that time Béla Kovács won on board his „Kincsem III.” 22 sqm Binnen-jolle.

48 boats started on this interesting race in varied weather conditions. The wind was mostly light again but two strong storms made the challenge very tough. The winner was again Béla Kovács on the 22 sqm Binnen-jolle „Kincsem IV.” with a great margin. His boat crossed the finish line at Balatonfüred after 24 hours and 24 minutes sailing. The second placed german boat arrived just hours later. The third was Gábor Ugron’s  „Rabonbán” .

The first win for the „Tramontana” 8R yacht still the most succesfull boat in the history of the Blue Ribbon with eight wins. The wind was again light on the first half of the race but a storm and the strong wind has arrived at Szigliget. „Tramontana” won with a 20 minutes advantege ahead of the two times winner Béla Kovács who sailed again the „Kincsem III.”. It is the first win of a women as the skipper of „Tramontana” was Mrs. Kultsár Evelyn Gordon.

After the race some sailors started to fight for ban the dinghies form the future races.

The racing dinghies including the two times winner 22 sqm Binnen-jolles were banned from the Blue Ribbon by rule changes.

36 boats gethered at the starting line on the 15th of August. The conditions were favouring again the light wind specialist „Tramontana” who won after 30 hours of racing. The skipper was again Evelyn Gordon. The runner up a new 6R yacht called „Talizmán” was skippered by Miklós Tuss. This is the only Olin J. Stephens designed boat ever sailed in Hungary. Both „Tramontana” and „Talizmán” is recently renewed and still sailing and racing on the Lake Balaton.

No race was held due to the World War II. Anyhow an interesting fact proves the strong wish of the hungarian sailors to race even in those terrible circumstances.

In the summer of 1944 the bombers of the Allied Forces were often flying over the Lake Balaton and the long distance races were cancelled.  Even so on the originally planned starting time of the Blue Ribbon 28 boats gathered at Balatonfüred to compensate the lack of the famous race. They had to postpone the start because of the flight of a bomber troop in the morning. Finally they could sail a race in good wind of course on a much shorter course close to the shore.

In 1946 the war was over but the country was totally ruined as well as the sailing facilities and yachts.

Many yachts were sank or destroyed but some already recovered. Lot of good sailors lost in the war or disappeared in russian compounds. Fraud in the elections, the forge ahead of the communist party were characterizing these years. So the contemporary press did not pay attention to the competition regarded as a gently ploy. This way we know just a few things about the first Blue Ribbon race after the war.

Anyhow some keen sailors worked hard on the rebirth of the Blue Ribbon. It is not exactly known how many boats were at the starting line on th 26th of July. After more then 26 hours of racing the winner was the „Hungária” 6R yacht (the hungarian participant on the 1928 Olympic Games) skippered by Kálmán Tóth. The second placed boat was beaten by 3 hours 40 minutes. No more results are known.

In 1955 among ideal weather conditions the 75 sqm Skerry Cruiser "Nemere II."  helmed by István Németh sailed around the course within 10 hours and 40 minutes. The great record could not be broken for 57 years. Although the boats are getting faster and faster the wind is rarly so fresh and stable like it was in 1955. Finally the record was broken in 2012 by the special two masted hungarian designed and built Catamaran the Fifty-Fifty. Márton Józsa"s team saild even faster in 2014 so the actual record is 7 hours 13 minutes and 57 seconds. The Monohull record holder is the Raffica Libera.

In 1934 the Kékszalag was founded as an open race for the title of the fastest boat of the Lake Balaton. In the following years different kind of restrictions were incorporated to the sailing instructions banning out several sailing boat types. The discussions to open the Kékszalag to the modern boat types have strengthened in the nintees when the sailing life and the boatbuilding in Hungary has started to develop again. Hovever the Hungarian Yachting Association heve noticed an increased demand to hold the competition annualy. Since 2001 the Kékszalag became a yearly event.

The coming years after this decision we may call as a Litkey era. The most succesful sailor of the Kékszalag history is Farkas Litkey with 11 line honour wins. He won nine in a row from 2001 to 2009. In 2010 helming a Multihull he finished on the 4th place but won again in the next year. In 2012 his mast was broken close to the finish line when he sailed on the second place and in 2013 he won his eleventh title. 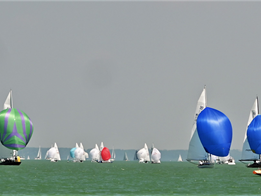 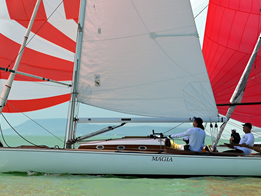 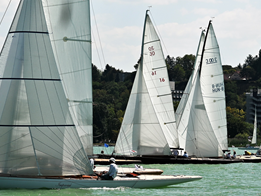 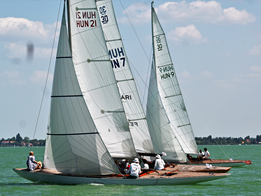 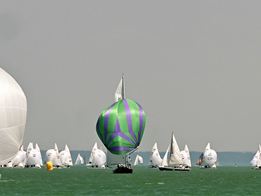 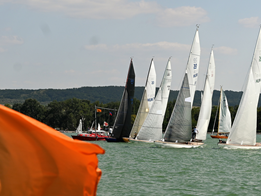 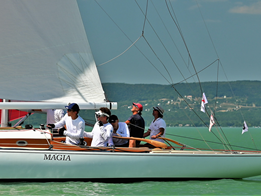 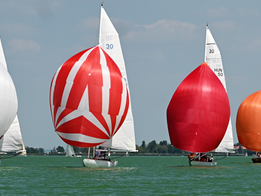 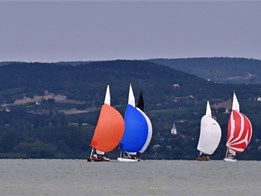 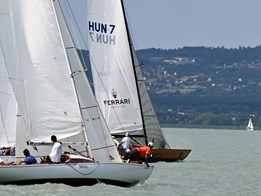 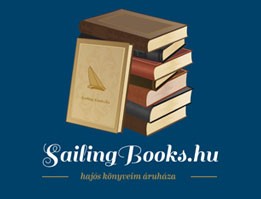 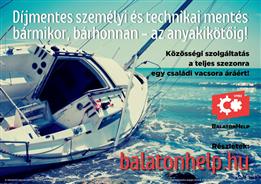 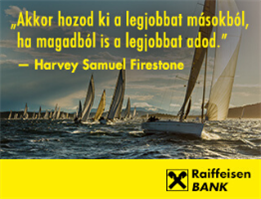 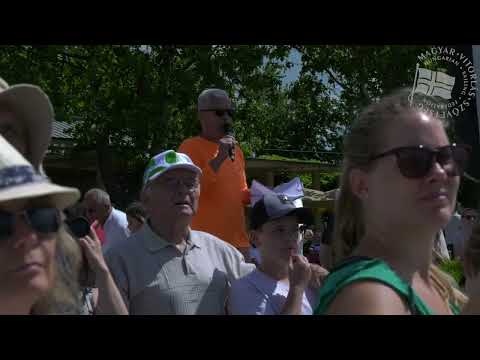 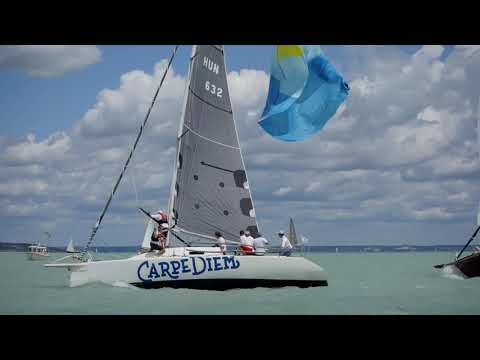 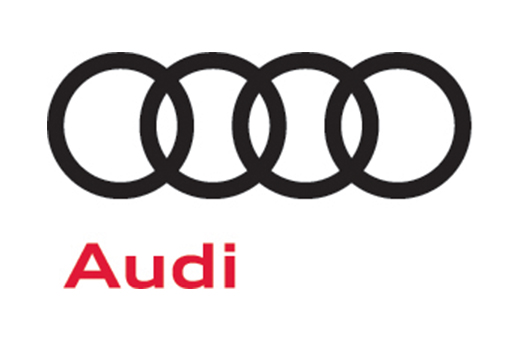 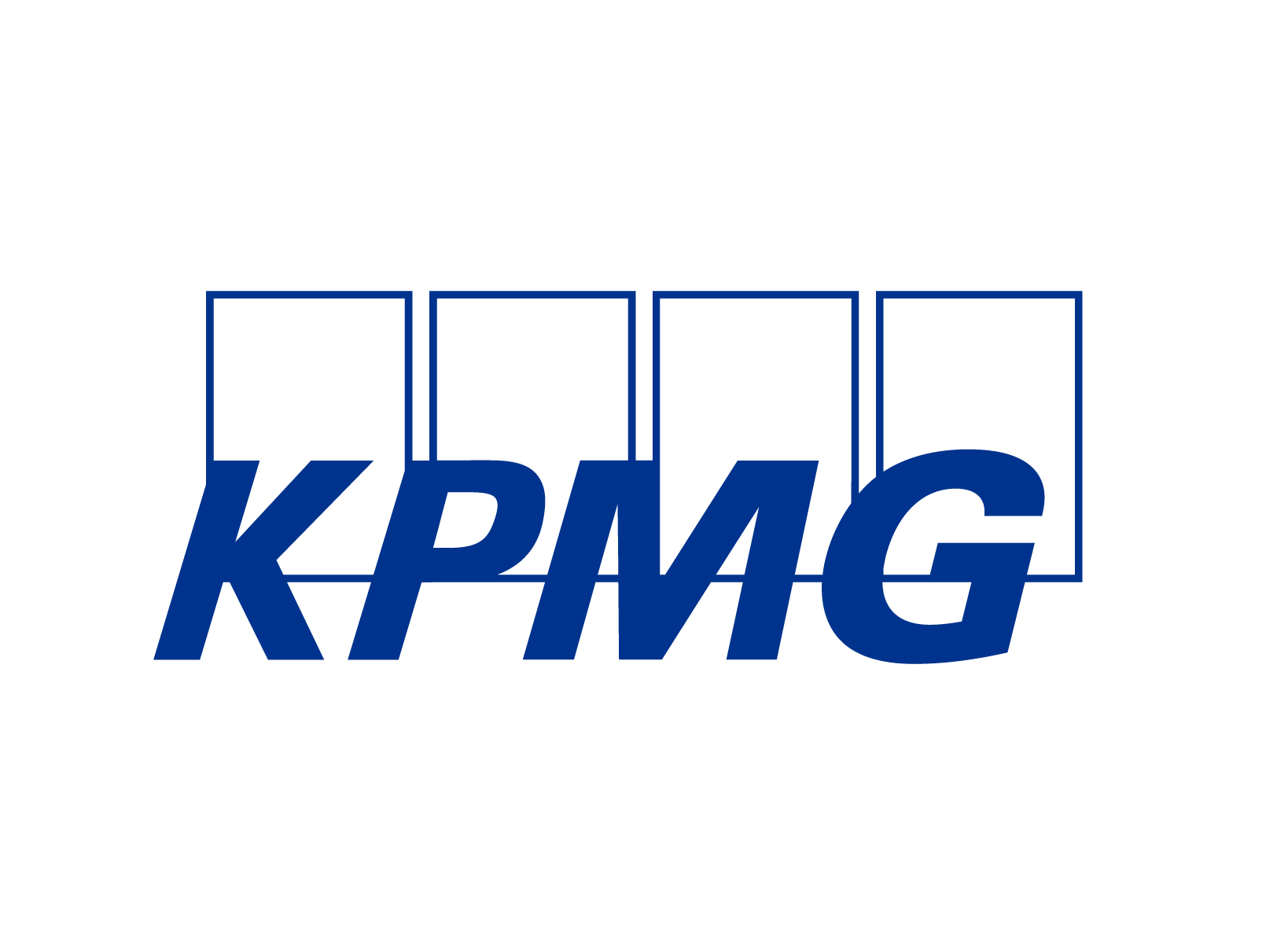 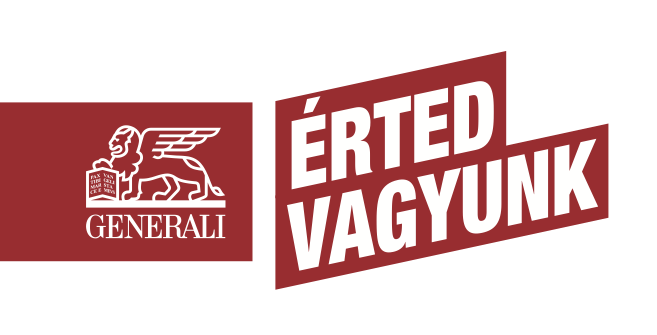 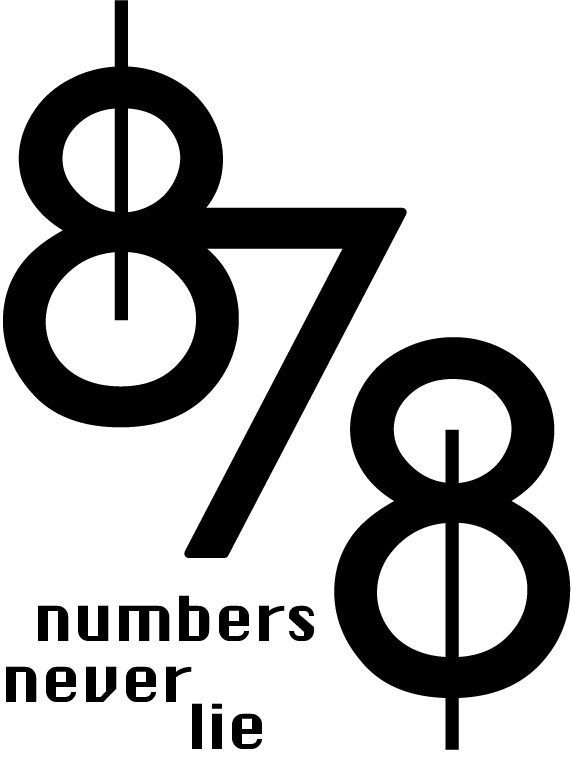 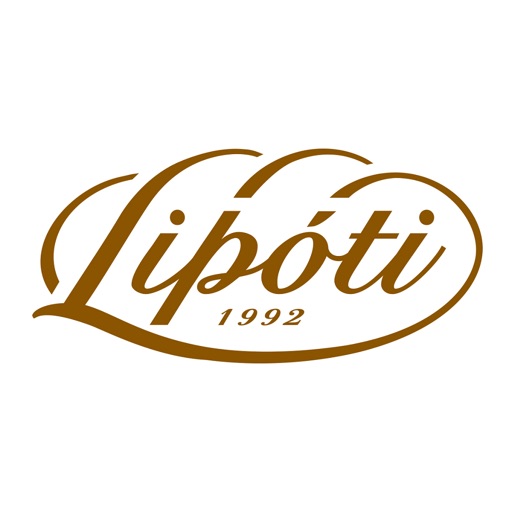 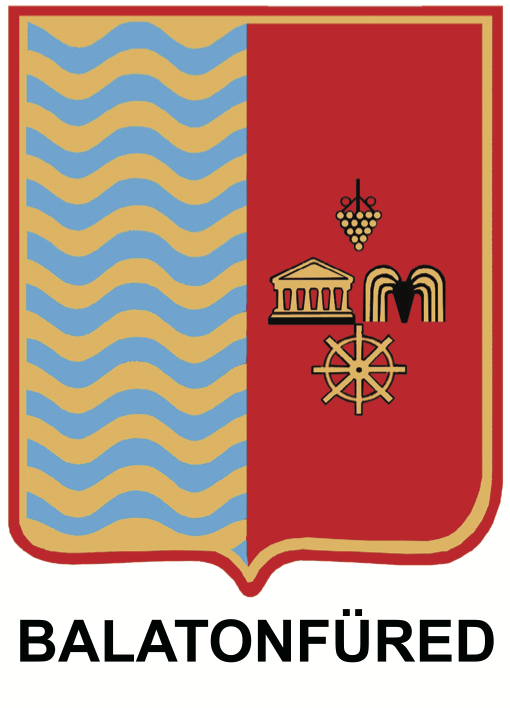 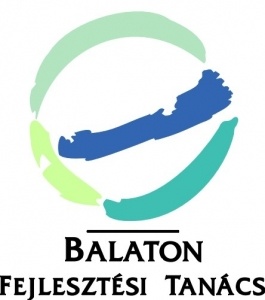 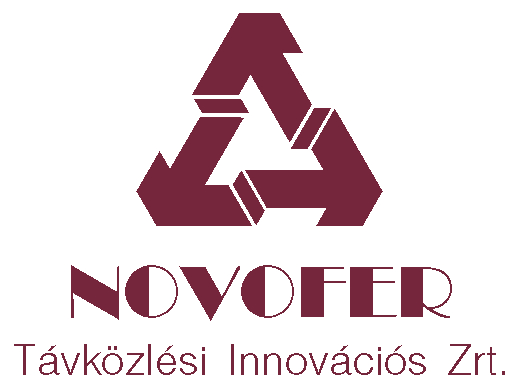